As the nightmare of the 2019 legislative session “progressed”, several examples of the propaganda put out by the progressive infrastructure—Democrat elected officials, media, activists, Twitter sock puppets and the like— were strikingly reminiscent of the slogans and language of George Orwell’s iconic novel 1984.

In this post, we’ll review the plot of 1984, describe what “Newspeak” is and how language is just another weapon in the arsenal of progressivism, chipping away at our Liberty and taking our freedoms one law at a time.

Published in 1949, 1984 is a dystopian vision of the future of the United Kingdom. In the novel the UK is part of a larger entity known as Oceania, which consisted of the American continents, the British Isles, the southern half of Africa and Australia. The story follows the journey of Winston Smith, an “Outer Party” member, as he begins to resist the thought control of the English Socialist Party, then engages in an illicit affair with a younger woman named Julia. Winston and Julia make contact with an “Inner Party” member named O’Brien, whom they believe to be a member of an imagined Resistance. After being provided with a copy of “THE BOOK”, a manifesto about the principles of “Ingsoc” (short for “English Socialism”), Winston and Julia read the book in a rented room above an antique shop, where they are later arrested by the Thought Police. After months of beatings, torture and brainwashing by O’Brien, who it turned out was a member of the Thought Police, Winston and Julia are released. While they were not murdered, they were nonetheless destroyed as human beings. The last words of the book are (speaking of Winston): “He loved Big Brother”. Big Brother, of course, is the personification of the Party, a figure modeled after Joseph Stalin.

Some of the examples of how language was used as a tool of control in the book are seen in the use and meanings of certain words and terms. “Newspeak”, the fictional language of Oceania is a controlled language employing restricted grammar and limited vocabulary, so that people are not able to think in terms or express thoughts that run counter to the accepted philosophy and tenets of the Party.

Because Newspeak was not yet the only language of Oceania – people still used traditional English, or “Oldspeak”— the capacity existed for people to have thoughts that ran counter to the accepted philosophy and tenets of the Party. When this occurred, the word for this was “thoughtcrime.”

Another example of Doublethink is the way that the Party named the various ministries it employed as organs of the socialist government. The Ministry of Plenty (miniplenty) controlled the economy and resulted in starvation and permanent economic hardship. The Ministry of Peace (minipax) was concerned with waging permanent war. The Ministry of Truth (minitrue) was the propaganda arm of the Party, and was also responsible for changing historical records – newspapers, film and pictures – to conform to Party orthodoxy. Finally, the Ministry of Love (miniluv) was the regime’s secret police who spied on Oceania’s subjects, arrested people for thoughtcrime, imprisoned, tortured, brainwashed and murdered them.

We can see that modern American progressives have adopted the same type of doublethink to the ways in which they frame their agenda. They use words as weapons, to brainwash the listener in to thinking that their policy objective is really a good thing, instead of the freedom-limiting thing that it is.

“Free college” sounds way better than college you have to pay for. But nothing is “free.”

“Medicare for All” and “Universal Healthcare” are substitutes for “socialized medicine.”

“Clean Energy” is a euphemism for “expensive, unreliable wind and solar energy.”

“Paid Family Leave” sounds wonderful, until you are told that you are paying for it through an income tax increase. The introductory language in the paid family leave bill in 2019 was an example of how progressives will use untruths as declarative statements of truth, inviting the listener (or reader) to suspend their reason in order to accept their statement. In the first paragraph of SB 19-188, the bill sponsors make a similar declaration:

“Colorado is a family-friendly state, and providing the workers of Colorado with family and medical leave insurance will encourage an entrepreneurial atmosphere and economic growth and promote a healthy business climate.”

Actually, in the real world, SB 19-188 will do the opposite. By increasing the direct costs of doing business, FAMLI [the Family and Medical Leave Insurance Program] will make it harder to start and continue to operate a business. Employers will pass on the costs of the additional taxes to their customers, meaning everybody’s cost of living will go up. Higher taxes, regulations and fines hardly encourage a “healthy business climate”. In short, it’s a lie.

Perhaps the most Orwellian term to come out of the 2019 legislative session is the “Office of Just Transition.” To recap: Colorado Democrats introduced HB 19-1261 which was designed to reduce greenhouse gas “pollution” and establish statewide greenhouse gas reduction goals. In complete denial of the fact that nothing we do in Colorado can possibly impact the global climate, the Democrats want to put coal-powered electricity generating plants into retirement and Colorado coal miners into the unemployment line.

In recognition that this legislation will put Coloradans out of work, House Speaker Becker and disgraced former Representative Rochelle Galindo introduced HB 19-1314 which creates another government bureaucracy to pay benefits to coal workers who are displaced by HB 1261 and to award grants to “eligible entities in coal transition communities that seek to create a more diversified, equitable, and vibrant economic future for those communities.”

In other words: government action, in response to an imaginary problem, will impair the ability of Colorado citizens to earn a living (and pay lower prices for reliable electricity). To “make up” for it, government creates another government program to give taxpayer-provided money to these workers and their communities. Here’s the kicker: there is nothing “just” about any of this, which is what makes it an example of Orwellian doublethink.

Another example of how the Left weaponizes language is seen in the perennial abortion debate. Of course, abortion itself is couched as “choice,” as if the decision to end a life is the same as the decision of what shoes to wear in the morning. “The right to kill an unborn baby” becomes “reproductive rights” (or the more hip “repro rights” for short).

An egregious example of this arose recently when the New York Times coined the term “embryonic pulsing” to disguise the fact that unborn babies have detectable heartbeats after about six weeks of pregnancy. As reported by Amanda Prestigiacomo in the Daily Wire, in an article describing new “heartbeat” legislation that has passed in Louisiana, the Times said “The measure would require an ultrasound test for any woman seeking to terminate a pregnancy, and forbid abortion if the test detects embryonic pulsing…”.

Another Orwellian aspect of modern progressivism is the way in which they use the traditional media, film and social media to advance their agenda. There may not be a real-life Ministry of Truth, but there certainly is a concerted effort on the part of the Left to brainwash Americans through left-leaning newspapers, magazines, movies and network news. Public education is run by progressives and teaches progressive values to America’s children. Social media run by the tech giants are all progressive platforms that are increasingly silencing conservative voices and stifling opposing points of view.

At the end of 1984, Winston is a ward of the State. His independence, his thought processes, his very soul were all crushed by the State. In Oceania, there is no resistance nor any possibility of resistance. The collectivist, totalitarian direction that the progressives in America are taking our country can only be resisted by insisting that words mean things, and that they mean the things they are commonly accepted to mean. The Law must be upheld. The Constitution must be upheld. Otherwise, we are on a slippery slope to the dystopian future Orwell wrote about. 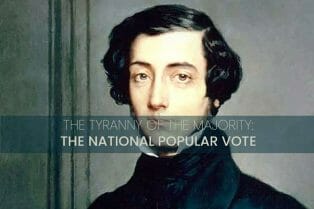