Some of Georgieva clients are perceived as “wealthy,” although Georgieva classified most of them as “middle class.” One woman in the article stated their household income was greater than $250,00 and lived in a home valued at approximately $1.2 million by Zillow. The woman said they had already spent $600,000 for her other children’s college education and only had a small amount of cash on hand. Additionally, they have no equity in their home.

The woman transferred guardianship to her business partner. Her daughter then applied for financial aid. She successfully was awarded a $27,000 merit scholarship and $20,000 in need-based aid, which does not have to be paid back. An additional $18,00 is paid by her grandparents. This covers the cost of her West Coast private college annual tuition of $65,000.

This is another example of “gaming” the system of college admissions. (Many of us remember the scandal involving William “Rick” Singer nicknamed “Operation Varsity Blues.” Singer’s bribery scandal was exposed in March 2019, and was influential in students obtaining admissions to elite schools.) It is perplexing to think that parents will display moral decay in order to get their child in the school of their choice, regardless of the financial and social implications that will be suffered in the present and the future.

It also raises the question, what is tuition for college students today? A good starting point is Forbes recent publication, America’s Top Colleges 2019. Twelve Colorado institutions made the list. In Table 1 the twelve are listed along with colleges some of my family members have attended. Forbes methodology in ranking colleges is based on alumni salary (20%), student satisfaction (20%), debt (20%), American Leaders (database of successful people, 15%), on-time graduation (12.5%), and academic success (12.5%).

Outstanding student loans are more than $1.56 trillion. John Miltimore in his article, Why College Tuition is So Expensive, states that almost 70% of the class of 2018 had student loans at an average debt of $30,000. Miltimore cites data from the Federal Reserve that shows “nearly 20 percent of students who took out loans are in default or nearing delinquency, triple the rate of mortgage loans. Meanwhile, the Brookings Institution predicts up to 40 percent of students who enrolled in college in the 2000s could be in default by 2023.”

What drives tuition to be so expensive? Miltimore and I agree. He states:

“Federal loans have made tuition far more expensive. Universities get paid upfront—so whether students graduate, drop out, or default on the loan doesn’t matter. Departing students are easily replaced. Confident that students have access to cheap money (which can be expensive in the long run), colleges have no incentive to control or cut back the prices of housing, tuition, fees, and meals.” 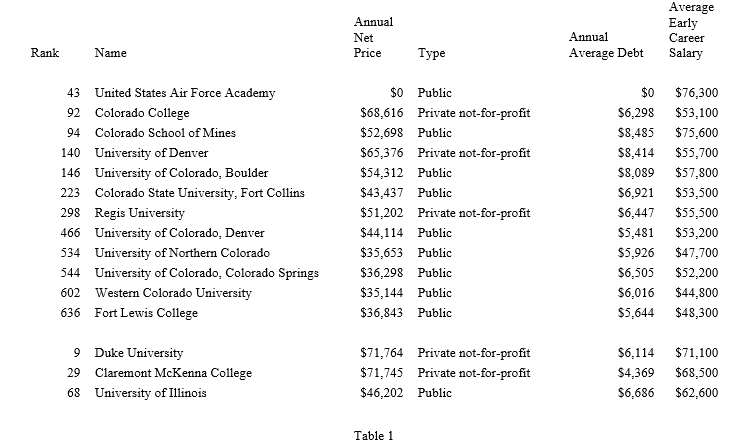 Unfortunately, it does not look like future students will get financial relief in regards to tuition. Too bad Presidents/CEOs of these institutions will not prove Miltimore wrong. They could take a responsible role in controlling the costs of housing, tuition, fees, and meals for enrolled students if they wanted to.

In The Wall Street Journal article, Who’ll Take a Pay Cut for Free College?, Joseph Epstein states that if the proposed policies of some Presidential candidates would have the government pay for “free” education, maybe cuts should start at the top, the “salaries of university presidents by, say, 90%. … I would evict them from their rent-free mansions and remove their cadres of servants.”
This instantly brought up the question, how much do the Presidents/CEOs get compensated? The Chronicle of Higher Education published a piece on July 14, 2019, titled Executive Compensation at Public and Private Colleges, written by Dan Bauman, Tyler Davis and Brian O’Leary. For the period 2008-16, 600 private colleges are listed and almost 250 public universities for the period 2010-18. Table 2 lists the institutions from Table 1 that are included in this publication. 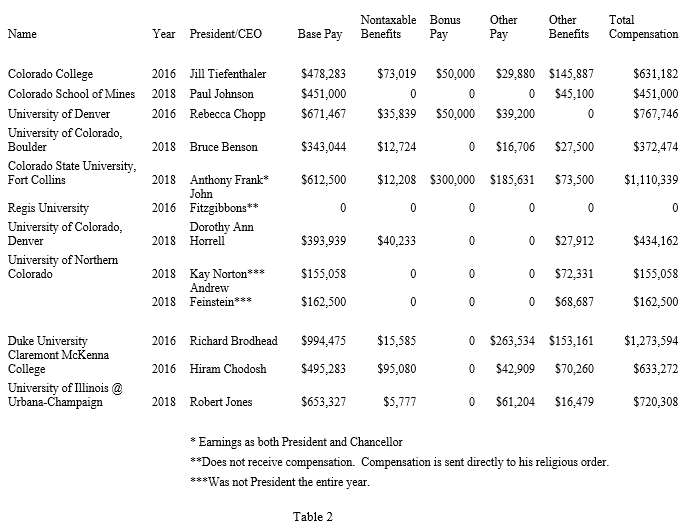 Some Presidents at Colorado universities are not listed above. Their compensation has been provided in local newspapers.

Mark Kennedy, the new president of the University of Colorado, will have a base salary of $650,000 with an additional $200,000 possibility based on performance incentives (which includes four forums/visits to communities outside Boulder, Colorado Springs and Boulder for $50,000 and another $50,00 for reaching out to government leaders, donors and alumni). He received $80,000 for relocating to Colorado, has a $15,000/year auto allowance, can have a sponsorship fee for a golf or social club membership, and retirement benefits. The full compensation package exceeds $1 million.

Joyce McConnel became the first female president of Colorado State University on July 1, 2019. McConnell’s compensation package consists of $550,000 per year. In her annual review she will be evaluated for extra incentive compensation. McConnell received $27,500 for relocation expenses, has an auto allowance of $12,000, a country club membership, and retirement benefits.

As our friend Laura Carno says in her book, Government Ruins Nearly Everything: Bad government incentives result in manipulated choices. This is not the proper role of government. The Obama administration should never have taken over student loans in 2010, and in doing so created a government monopoly. I am in full agreement when Miltimore states that the government needs to get out of the “loan business altogether.

As a solution, Miltimore offers:

“If universities themselves offered loans, incentives would push them toward controlling costs and maximizing student success after graduation. Another option is income share agreements, which allow potential employers or independent organizations to pay tuition in exchange for a percentage of the students’ future earnings. The concept, pioneered by economist Milton Friedman is increasingly popular, especially in Latin America.”

It is a tragedy that parents resort to giving up guardianship of their students in order to attend a specific college, especially one that is outside their financial capabilities. Options are abundant in college selection. Both education and freedom to choose are part of the American Dream. Parents and students should not be compromising either one in order to achieve their ultimate goal. If parents are willing to give up guardianship of their children in order to pay for college, what will be next?