What is the proper role of Colorado’s government?

How big is Colorado’s state budget? How much has it grown in the last 27 years since the Taxpayer’s Bill of Rights (TABOR) was passed? Where does the money come from? More importantly, what is it spent on? Why do politicians want to do away with TABOR and why do they always want more of your money?

The answers to all of these questions revolve around a discussion of the proper role of government. When that role is defined correctly – and by “correctly” I mean the natural laws that Thomas Jefferson identified in the Declaration of Independence – the role of government is limited, strictly defined, and consists only of the powers granted to it by We The People.

When the role of government is expanded to include other social goals and aspirations, the size, scope and intrusiveness of the government grows. The bigger the expansion the more the growth. When government grows it requires more and more money for the services and programs it provides.

Now, governments don’t create wealth. They can’t just print money and give it value. A state government like Colorado’s cannot print money or define the value of currency anyway.

Productive people create wealth. The more productive, the more value they create. When willing buyers and sellers make exchanges in free transactions, they create value. This is true if you are offering a product for sale to customers, a service to other people, or selling your labor to an employer. Obviously, the more the employer values your labor, the more you will be paid. When a government artificially and arbitrarily says that your labor is worth more than the employer is willing to pay (as in the case of minimum wages), they will use less of it or won’t use it at all.

It is the productive wealth created by Individuals that governments take, mostly by force, in order to have the financial resources to perform the functions it performs. When government is limited to its legitimate functions, which are: protecting life, liberty and property, it is going to be small in size and scope and consume fewer of society’s resources.

Protecting life: this includes law enforcement and the military. Not only that, it includes protecting the right of people to be able to defend themselves and others. Which means: it is not a proper function of government to limit that ability through civilian disarmament, gun control laws, and the like.

Protecting liberty: this means enacting no laws that inhibit people making the choices that best fit their lives. As long as people don’t infringe on the rights of others, they should be free to do business with whom they want, offer services and products that others are willing to buy and associate with whom they please.

Protecting property: this means nobody can be deprived of their property without due process of law. It means courts to adjudicate and enforce contracts. It means protection of intellectual property via patents and trademarks.

All of which brings us back to the Colorado state budget. In 1992, 53% of Colorado voters elected to place limits on the growth of government by passing the Taxpayer’s Bill of Rights (TABOR), which is now Article 10, Section 20 of the Colorado State Constitution. (Read more about Why TABOR Matters)

TABOR places limits on government by requiring the following:

1. Governments cannot impose new taxes or raise existing taxes without an affirmative vote of the people.
2. Governments cannot issue new indebtedness without an affirmative vote of the people.
3. In the event governments take more money than they’re supposed to – with such limits being defined as the inflation rate plus population growth rate – they are required to return our money to us, unless we vote to allow them to keep it.
4. Such tax requests from governments are only allowed to take place in regularly scheduled elections, not special elections.
5. Finally, TABOR specifies the language that must be used “SHALL TAXES BE INCREASED…” and stipulates that requests MUST BE IN ALL CAPITAL LETTERS.

In FY 1993-94, Colorado’s state budget that was passed by the General Assembly stood at $8.0 billion in appropriations funded by $8.0 billion in tax and other revenues. (Colorado is required to have balanced budgets every year). By FY 2019-20 the state budget had grown to $32.5 billion, a growth rate of 306%. To put that into perspective, in the same time period Colorado’s population increased by about 75%, and the inflation rate over the period was 86%.

The table below shows the Colorado State Budgets at a Glance – FY 1993-94 to FY 2019-20 adjusted for inflation. It shows that even with TABOR limitations, the budget has grown by more than 100% over the past 27 years. 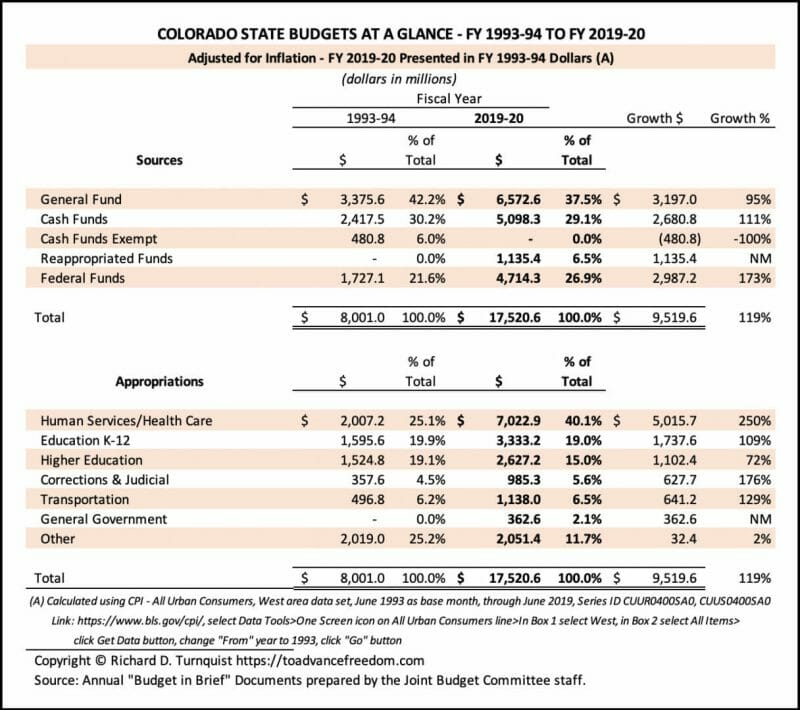 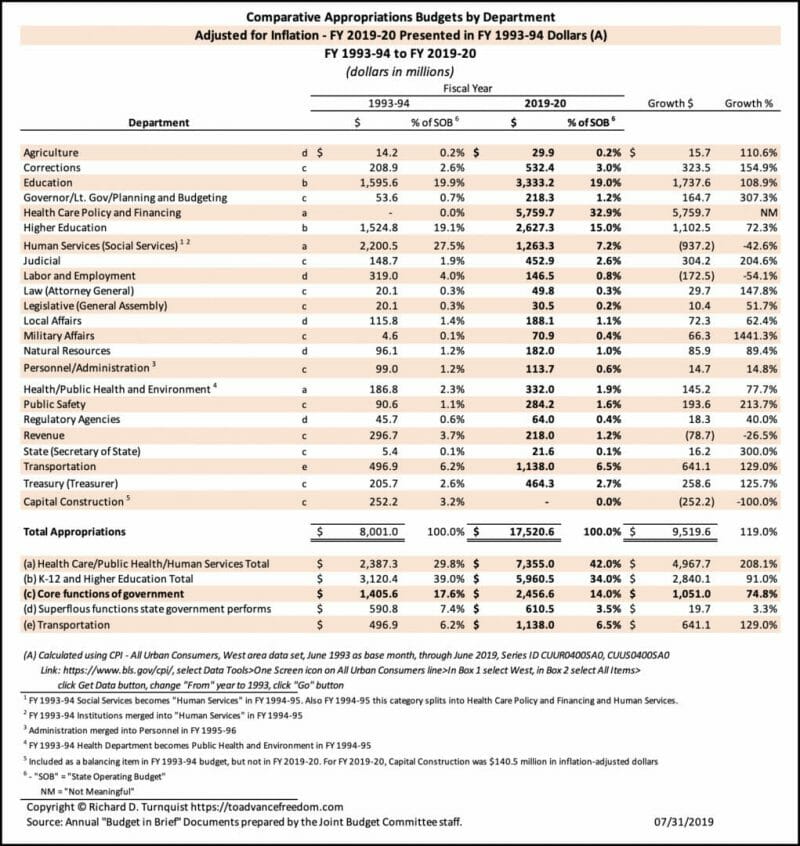 Clearly, the voters of Colorado, through our elected representatives from both major parties over the last 27 years have decided that Health Care Policy and Financing is the single most important function of government, taking $10.7 billion from taxpayers (including $6.1 billion from taxpayers across the United States, in current year dollars) to pay for the following items: 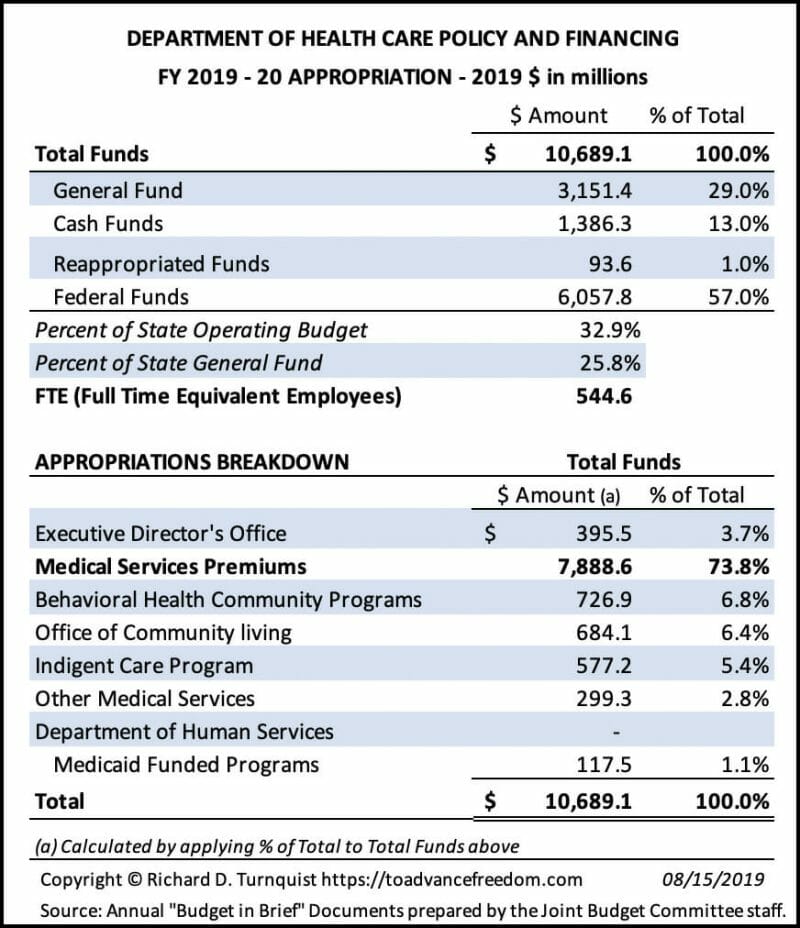 Aside from the almost $8 billion that is going to pay medical services premiums for over 1.2 million Coloradans, note how the Executive Director’s Office consumes almost $400 million. How many people work in that office, what do they do and how much are they being paid? What makes up the $300 million in “Other Medical Services”?

Let’s pause and ask: Are these proper functions of government? Could these people be better served through private solutions? Is it moral to take tax money from some people to pay for other people’s medical expenses?

Here’s a look at the Department of Public Health and Environment: 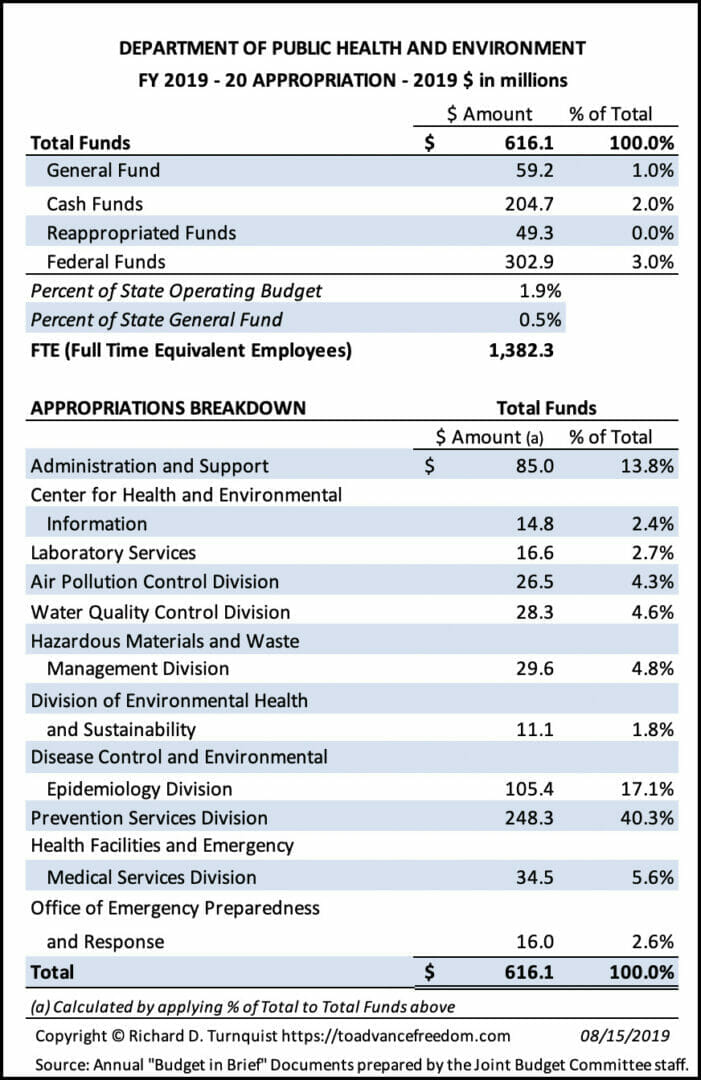 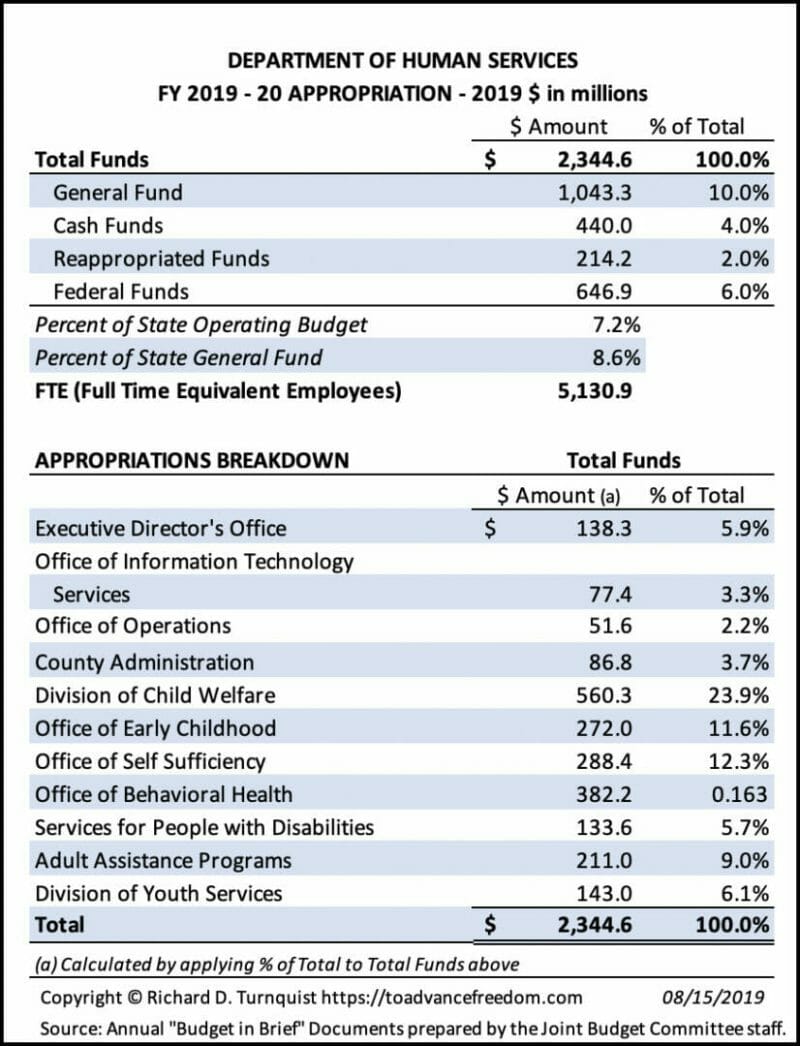 Are politicians being good stewards of tax dollars allotted for education?

Politicians are always saying they need more money (and they have asked to raise your taxes repeatedly) to increase funding for K-12 and higher education. In FY 2019-20 those two together account for 34% or $11 billion of our budget appropriations. That equates to $6,915 per public school student and $26,779 per higher education student. Is this enough? If not, how much is enough? How much of society’s resources do we need? Is education a proper function of government, or would the goal of educating the next generation be better served by private institutions and individuals, as it was during the years after America’s founding? Are we getting a satisfactory return on our money? 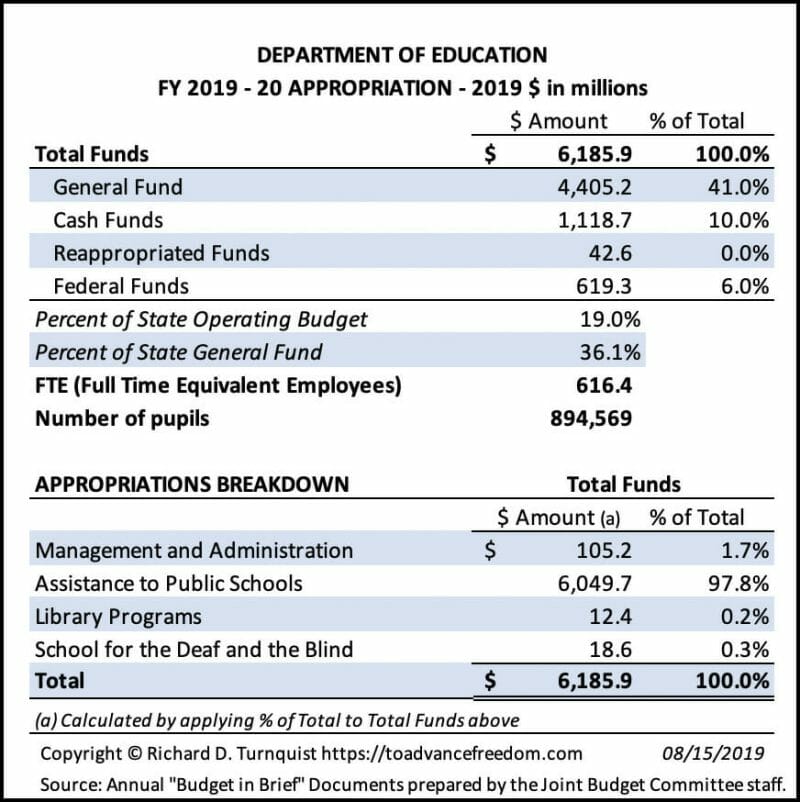 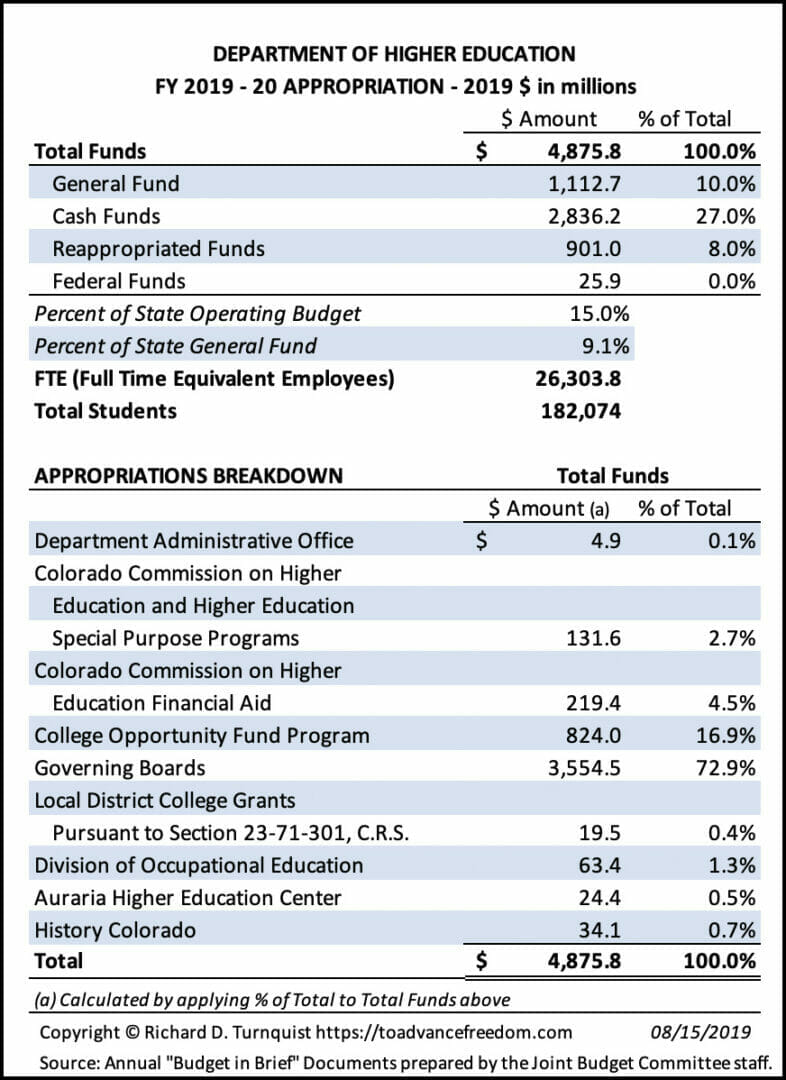 As the graph above shows, these taxpayer-funded programs will only continue to grow over time. And even though Colorado taxpayers voted down government-run healthcare (2016 Amendment 69) by a significant margin of 79% to 21%, the single largest appropriation area IS healthcare.

The connection between tax revenue and government performance

This brings us to the topic of taxation. As I pointed out in my blog post Why Budgets Matter, personal income taxes generate a full two-thirds of state General Fund Revenues. In FY 2019-20, this is expected to be about $8.3 billion, or about $1,400 per capita. The second-largest funding source for the General Fund are sales and use taxes, which in FY 2019-20 is expected to be $3.2 billion or $560 per capita. One problem with sales taxes is that they are regressive, i.e. lower-income people pay a higher percentage of their income in these types of taxes.

Colorado voters over the years have soundly rejected ballot measures to increase income, sales and use taxes. Given this dynamic, politicians are now trying to pretend that government-run programs funded by forced takings are “enterprises”, which collect “fees” and “premiums” and are therefore exempt from TABOR. 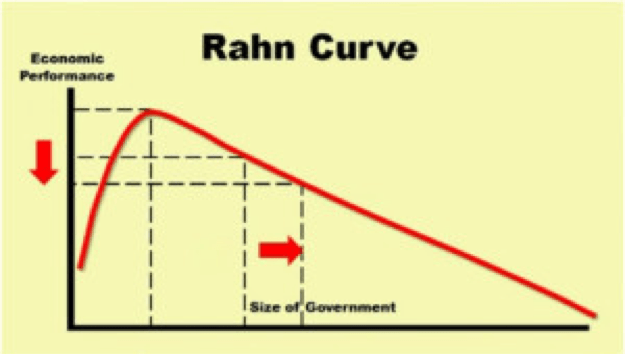 In their book An Inquiry into the Nature and Causes of the Wealth of States, authors Arthur Laffer et al document how states that have zero or low personal income tax rates do better economically than states with high personal income tax rates and higher tax burdens. They also point out, ironically, that low tax states have more revenues available for public services and indeed achieve better results at performing the proper functions of government.

After reading that book, it is clear that those state governments whose policies more closely align with the ideal outperform those states that don’t. This means more economic growth, more opportunity for everybody, especially those at the bottom of the economic ladder, and more prosperity. It also, ironically, means more tax revenues for governments to provide those legitimate functions that they do provide.

I would argue that improved economic prosperity leads to greater human flourishing for all segments of the population. The highly productive get to keep more of the value that they create. Those in the middle also keep more of what they earn and have many more opportunities open to them. The people who need society’s help also benefit, because generous people freed from onerous tax burdens have more available to give to charity, and Americans, despite our tax burdens, are already the most generous people on Earth. In addition, giving people a hand up instead of a handout is better for them. A culture of dependency on government is harmful to those who rely on government and may be a causal factor in drug and alcohol abuse, homelessness and other social pathologies.

In the real world, it will be very difficult, politically and structurally, for Colorado to do away with the individual income tax. The best we can hope for is that the limitations placed on government by TABOR continue in place, and that Proposition CC is defeated. I would also argue that at some point, we should have a ballot initiative to put a further limit on our state government: that ANY “fees” (except for specific amounts paid for specific purposes – not related to income or wealth) and “premiums” to fund government “enterprises” must also be subject to a vote of the people.

By all means, let’s have a conversation about the proper role of government in Colorado. Let’s talk about taxes, health care, education and all of the other areas where government spends our money. And most of all, let’s preserve our Taxpayer’s Bill of Rights and our Colorado way of life.