One of the most controversial aspects of the Colorado Constitution is Article 10, Section 20, titled the “Taxpayer Bill of Rights,” also known as TABOR.

TABOR was on the 1992 ballot as Amendment 1 and passed with 53% of the vote in that election.

Money taken by force through taxation is the lifeblood of any government. TABOR seeks to limit the growth of government by limiting the amount of taxes that governments in Colorado can collect by requiring voter approval before any new taxes are imposed or tax rates are raised. TABOR also defines a formula for how much money a government can keep and stipulates that governments must refund “excess” revenues to taxpayers unless they receive approval from the voters to keep those revenues. It also requires voter approval to issue bonded debt. TABOR also tells government HOW to ask for more tax revenues or bonded debt. It specifies that such questions must be decided on regularly scheduled elections and the language the ballot question must have.

The formula that defines the amount of tax revenues that governments are allowed to keep uses population growth and the inflation rate as the limiting variables.

Over the years since TABOR was enacted, there have been many votes to ease TABOR limits or to allow for tax increases. There have also been votes to allow governments to keep excess revenues. In that regard, TABOR has been working exactly as intended.

TABOR was significantly weakened in 2005 with the passage of Referendum C, which called for a 5 year “TABOR timeout”, allowing governments in the state to keep revenues which were in excess of the TABOR limit and to avoid paying refunds to taxpayers.

Over the years, voters have approved local tax increases, indicating that people are willing to fund local projects with accountability in their own communities. However, on a statewide basis the voters have been decidedly anti-tax. The table below shows that, with the exception of early votes for an education funding increase, Referendum C and imposing and raising marijuana taxes, voters have consistently voted “No” on income, sales and use tax increases by significant margins. They have twice voted down “progressive” (tiered) income tax rates.

What are the benefits of TABOR? First and foremost, TABOR limits the growth of government and prohibits politicians from raising or imposing new taxes without permission from taxpayers. Why is this a benefit? Because research shows that bigger government means less prosperity. It’s one of the reasons why Colorado’s economy has done so well over the years.

If not for TABOR, it is quite likely that instead of a flat 4.63% income tax, Colorado would have tiered tax rates, with the top tax rate reaching into the double digits. California, the state Colorado Democrats most want to emulate, has a top income tax rate of 13%. Yet, as the table above clearly shows, Coloradans over the years have clearly shown their opposition to progressive income tax schedules and higher income tax rates.

Why politicians and bureaucrats are against TABOR

If TABOR is such a benefit, why do politicians of both parties hate it so much and try to evade it by any means possible? The answer is quite simple: TABOR places constraints on how much money they have to spend on the government programs they want to offer. Because modern progressives think that government should do just about everything, there is no limit to how much taxpayer money they want to spend.

The effects of TABOR are compounded by a couple of other factors that come into play. The first is the Gallagher Amendment, adopted in 1982 which caps how much governments can collect in property taxes. Because of TABOR, local governments can’t raise property taxes without a vote of the taxpayers.

In 2000, voters adopted Amendment 23 which requires the government to increase spending on K-12 education each year. This places upward pressure on state budgets every year. Before TABOR, property taxes were the primary funding mechanism for public education. Now, the state pays the majority of it.

Because of constraints like these, various left-leaning organizations like the Bell Policy Center and the Colorado Fiscal Institute have agitated for TABOR’s repeal since it was enacted. The current State Treasurer, Democrat Dave Young, describes TABOR on his official state website as follows: 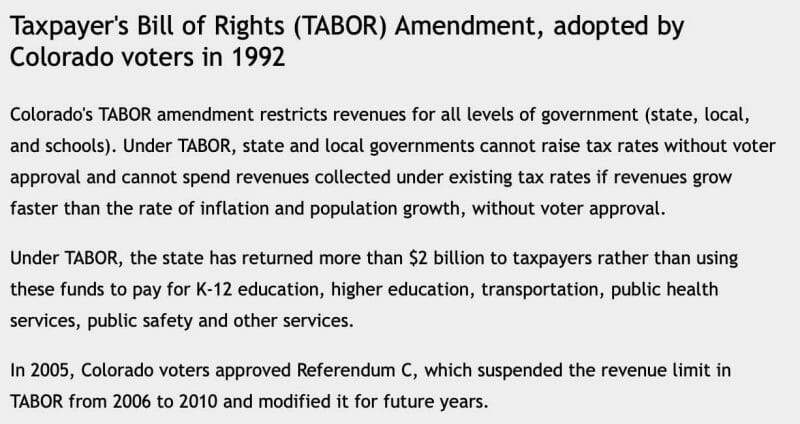 With the overwhelming victory of the Colorado Democrats in the 2018 election, giving them complete control over our state government, it soon became clear that there wasn’t enough money in the budget for all of their desired programs including paid family leave, full day indoctrination…I mean…”kindergarten,” “reproductive justice” and the like. This gave rise to their desire for a permanent “TABOR time-out” in the form of Proposition CC.

Proposition CC is a referred ballot measure, meaning that the General Assembly passed a bill (HB 19-1257) sponsored by Speaker Becker, Representative McCluskie, Senator Court and Republican Senator Kevin Priola. Priola is also the only Republican who voted in favor of 1257. Because one rogue Republican signed onto this bill, supporters can claim it is “bi-partisan”. It is not.

Proposition CC basically guts TABOR, allowing the state government to keep all excess revenues into perpetuity, with said funds supposed to be designated for public and higher education as well as transportation infrastructure funding. Transportation infrastructure – one of the arguably proper roles of government – is typically one that gets neglected when it comes to Democrat budget priorities. As far as education goes, it’s difficult to know how much of society’s resources should be allocated to public schools and higher education, but one thing is for sure: there never seems to be enough money for either. Referendum C was supposed to go to these spending areas too.

Proposition CC is a bad idea for several reasons. First, it is permanent. Colorado taxpayers would never again have the opportunity to receive back excess revenues in the form of tax refunds. It is a de facto tax increase, because the state would be able to keep more of your tax money.

Finally, Proposition CC is intended to make up for the expected revenue shortfall from another bad piece of legislation, SB 19-181, which will curtail oil and gas operations and lead to lower severance tax collections.

As we’ve seen above, since FY 1993-94, the state budget has grown by an average of almost $1 billion per year, yet the state legislature consistently fails to adequately fund infrastructure and education.

While the provision for voter approval is not affected by Proposition CC, that aspect of TABOR is already dead anyway. All Democrats have to do is call a “tax” something else, say, a “premium” or a “fee”, and they can do whatever they want. We saw that the last two legislative sessions with the Family and Medical Leave Insurance (FAMLI) program, which called for new income-based taxes to fund a huge new government entitlement program.

Any money taken by government force to fund government programs is a “tax” in a world where words mean things, and under TABOR requires the approval of the voters. Democrats said they could evade this requirement by calling FAMLI an “enterprise”, which in the context of TABOR is a government-run “business”. Again, this is a lie. Customers have the choice of whether or not they patronize a true business, and a real business is not able to collect revenues from customers by force.

TABOR isn’t perfect, but it’s elevated the economy of Colorado and its citizenry

While TABOR is not perfect (for example, the language allowing government-run “enterprises” is problematic), it, along with our constitutional balanced budget requirement, does force a certain discipline on the elected officials we send to the state capital every two and four years. As we’ve seen above, the budget has grown SUBSTANTIALLY over the last 27 years even with TABOR in place. I shudder to think what it would look like without it.

Colorado is the only state to have a TABOR-like amendment. It’s one of the reasons our economy has done so well over the past couple of decades – weathering the recession of 2008 and recovering faster than the rest of the country – and it should be guarded and preserved. Let’s demand that our elected officials focus on the core, legitimate functions of government and keep budgets and spending in check.