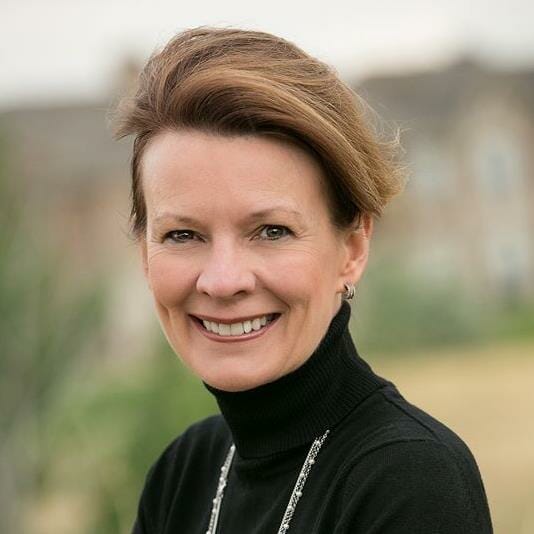 Kim Monson grew up in western Kansas and has a deep appreciation for rural America. She is grateful for the classical, liberal, public K-12 education she received that gave her the tools necessary to pursue her hopes and dreams. She attended the University of Kansas for one semester.

After a brief detour in her life, Kim moved to Colorado with the belief that with hard work and perseverance, anything is possible. And it is. Kim began work as a bank teller in Longmont. A few years later, she went to work with a small stock brokerage firm as a stock trading assistant. Studying at night and on week-ends, Kim passed her Series 7 exam and shortly thereafter, went to work with Boettcher and Company as an investment broker. Within a few years, she became one of the youngest vice-presidents at the firm. Kim retired from the investment business when the second of her three children was born and has worked in the women’s apparel business for many years. In 2013 she began her broadcasting career as one of three “Americhicks” on KLZ 560 AM with a broadcast reach into Wyoming, Kansas, New Mexico and west to the mountains.

With the rampant divisiveness in America today, The Kim Monson Show dissects issues using the litmus test of “Freedom vs Force and Force vs Freedom.” Surveys show that most Americans, (Blue dog Democrats, Unaffiliateds, Libertarians, Conservatives and Republicans), value the American Idea of every individual pursuing their Life, Liberty and Happiness. Kim promises to honestly, and with increased clarity, bring forth issues that affect you and those you love. We are in this “Battle of Ideas” together and Kim will do everything she possibly can to help you understand the issues so that you can engage in thoughtful dialogue with friends, family, colleagues and neighbors.

In 2016, Kim traveled with a group, organized by the Denver Police Activities League, that accompanied four D-Day Veterans to Normandy, France for the 72nd anniversary of D-Day. She returned to the states realizing that their stories needed to be heard. Hence the WWII Project was created. Kim has interviewed over 100 WWII Veterans. Her radio show, America’s Veteran’s Stories with Kim Monson highlights Veteran’s stories from all wars & conflicts plus peacetime service.